Eira’s class had a very busy week in school! To celebrate Science Week, each class got the chance to have a new teacher every day who taught them something new. Eira’s class had so much fun becoming scientists and working together on scientific experiments and activities each day. They experimented with designing bridges (that were strong and sturdy), making 3D shapes using plasticine and toothpicks, creating mazes and exploring forces. They also joined in some Science Week Zoom calls and learned about sustainability, smallpox, electrical currents, how frogs hear, how birds fly and more! They had a very special guest in their classroom on Friday – Archie’s mum Brenda who is a scientist in the Mater Hospital. Brenda taught Eira and Emma’s classes all about our immune system.

Second Class continued their ballet lessons on Tuesday with Stephen and then prepared for the Amber/Active Flag elections. Each child decided whether they would like to be a part of this committee and worked on speeches and posters for their campaign. Following the election, Eira’s class were very lucky to receive a Zoom call from Irish Olympian rowers, Aifric Keogh and Eimear Lambe who inspired each child to follow their dreams and reminded them that anything is possible – even making it to the Olympics!

Eira’s class have also learned about Éadaí (Clothes) this week in Gaeilge and enjoyed putting various items of clothing on the clothesline. They also explored the works of Vincent Van Gogh and recreated Sunflowers and Starry Night and learned all about patterns and estimation in Maths. Second Class also began their Picker Pals adventure again this year. Picker Pals is a wonderful initiative that ties in well with Learn Together (Ethics and the Environment) by aiming to create a better environment for the future. Julia is the first Picker Pal of the year! Their week was topped off with a lovely session of whole school singing which was hosted by Alan and Orla on Friday. Second class have had a great week in school, and especially loved exploring Science Week at Broombridge ETNS. 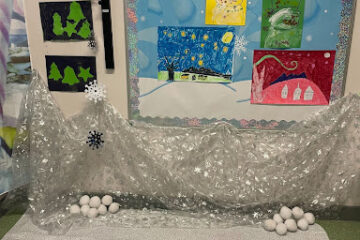 In Caroline’s class we have been busy bees over the last number of weeks. We have been creating a range of beautiful art pieces linked to Winter including our snowmen paintings and drawing our own Read more… 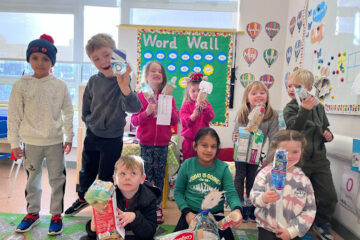 Senior Infants have been hard at work!

Maths We are learning all about the number 7 and many different ways to make 7. We used cubes, magnetic tiles, bears and many other tools to explore the number 7!  Literacy:  We are practicing Read more…